admin2020-03-12T15:57:18+07:00
By admin INTERNAL NEWS, NEWS & EVENTS Comments Off on Conference of nationwide typical advanced and creative laborers in Construction industry in 2019

Attending the Conference, there were: Mr. Nguyen Khac Ha, Head of Department of Emulation and Commendation of ministries, departments, central agencies and organizations; Mr. Trinh Thanh Hang, Member of the Presidium, Head of VGCL Women’s Committee; Mr. Le Cao Thang, Member of the Executive Committee, Deputy Head in charge of VGCL’s Propaganda and Education Committee; Comrade Do Thi Phong Lan, Deputy Director of Organization and Personnel Department, Head of the Emulation and Reward Department of the Ministry of Construction; representatives of departments, departments and institutes of the Ministry of Construction; comrade Nguyen Thi Thuy Le, Member of the Civil Affairs Committee of the Ministry of Construction, VGCL Executive Committee, President of VNUBWC; Mr. Do Van Quang, Standing Vice President of VNUBW; comrades of Vietnam Union of Building Worker Vice Presidents: Pham Xuan Hai, Vu Ngoc Chinh and all officials and employees of the agency; representatives of units in the Emulation Division of the central trade unions; professional leaders of units in the industry; leaders, presidents and vice chairmen of trade unions under the construction of VNUBW; newspaper, television and 173 reporters who are typical of advanced workers with good skills and creative workers are honored on this occasion …

Praise the advanced examples, especially the direct production workers in the Workers’ Month has become a traditional activity of VNUBW continuously for many years. This is the 9th year, the Ministry of Construction and VNUBW coordinate to organize this activity. 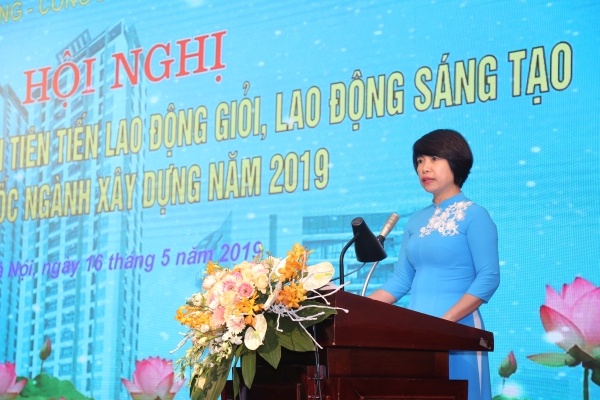 According to the report, in 2018, the units in the launching industry organized 416 campaigns, emulation campaigns and emulation movements organized in areas suitable to the functions and tasks and characteristics of each muscle. Agency, unit, typical: LiLama organizes to launch emulation for units participating in construction at Long Phu Thermal Power Plant, Song Hau 1 Thermal Power Plant, Vinh Tan Thermal Power 4. Song Da Trade Union launched emulation on the construction of Nam Po hydropower plant; Song Da 5 JSC launched emulation at the project of the reservoir of Ban Lai and Lang Son water reservoirs; Song Da 9 JSC organized a campaign to emulate 181 days and nights for the flood prevention objective in 2018 and installed the machine at Pake hydropower project (Laos). Viglacera always attaches importance to launching emulation movement “Good labor” and “Creative labor”, “Maintaining machinery and equipment always like new”, “Promoting initiatives, technical improvements, real saving the campaign “Ensure and improve the quality of construction and construction products”, contributing to speeding up the progress of work, saving production costs, successfully completing the proposed plan. Bach Dang Construction Corporation-JSC launched emulation at the project to expand Hai Phong city water supply system phase 2; Vinaconex 2 JSC has launched emulation of the package “Construction of structural parts of towers C and B” right at the project of high-rise housing project in combination with INTRACOM office; LICOGI Dong Anh Joint Stock Company regularly launched the 5S emulation movement… Emulation movements have a direct impact on promoting the production and business progress of each agency, unit and enterprise, labor, product quality, and quality of construction have been improved, contributing to promoting the achievement of the socio-economic development objectives and tasks of the country, the sector, the corporation and the unit.

In the past year, the Emulation Movement “Good labor, creative labor” continued to be promoted, in 2018 there were 2,126 initiatives and topics applied with a total value of more than 95 billion VND, the total amount rewarding initiatives of over VND 20 billion. From emulation movements of selected units, reviewing 173 outstanding individuals to attend the Conference of praising good labor and creative labor in the whole construction industry in 2019. 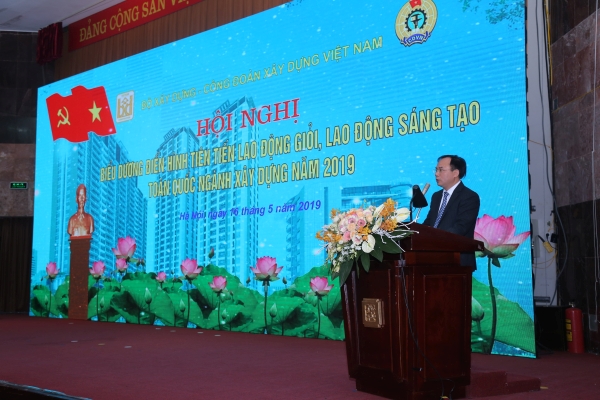 Speaking at the Conference, Deputy Minister of Construction Nguyen Van Sinh praised and acknowledged the important contributions of collectives and individuals in the patriotic emulation movements of Construction industry. Deputy Minister evaluated individuals praised and rewarded at the Conference are typical examples of the Industry, demonstrating the spirit of dare to think, dare to do, know how to overcome difficulties of themselves and units to complete excellently assigned tasks and looking forward to in the coming time, the construction industry will have more advanced examples, creative labor, contributing to the cause of building and developing the industry and the country. 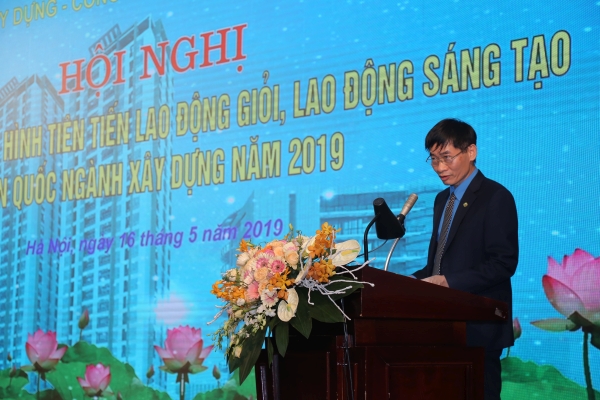 Speaking at the Conference, on behalf of the VGCL Presidium, Vice President of VGCL Tran Van Thuat highly appreciated and congratulated the results achieved in the excellent labor movement, creative labor created by units under Construction industry. The Vice President expressed his wish that the praised individuals will continue to have innovations and innovations; at the same time, creativity needs to be multiplied and enhanced. Vice President also noted that the movement of good labor, creative labor needs to develop both width and depth to detect more advanced examples.

Individuals are commended and rewarded as those who directly work in production, work in many different fields, have qualifications, skills and working time, different working conditions, but they all have a common point about beautiful qualities is hardworking, hardworking, energetic, active, creative, and loving jobs. They are always eager to learn, research and improve techniques, innovations and creativity in production labor, work to improve labor productivity, save raw materials, fuel and materials, improve conditions working to improve the material and spiritual life of myself and colleagues and contribute to building a sustainable development.

MOC and VNUBW would like to acknowledge and praise the valuable contributions of collectives and individuals in the patriotic emulation movement, in the construction and development career of Construction and VNUBW. With a tradition of more than 60 years of construction and development, MOC and VNUBW have called for all officials, union members and employees of the whole branch to continue to promote the glorious tradition of the working class and the Vietnam Trade Union organization, upholding the spirit of proactive creativity and sense of responsibility, actively implementing patriotic emulation movements to celebrate the 90-year anniversary of the establishment of Vietnam Trade Union (28/7/1929-28/7/2019), celebrate major holidays, major events of the Industry and the country. 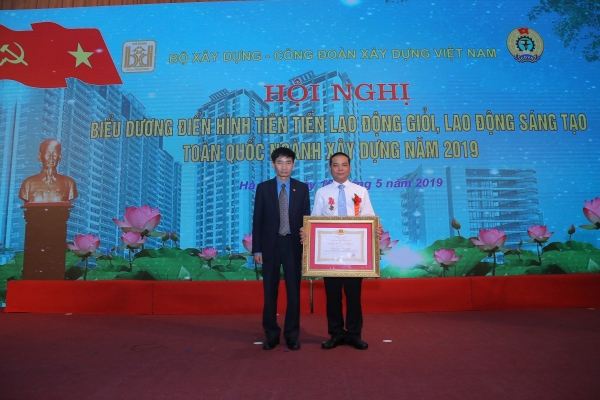 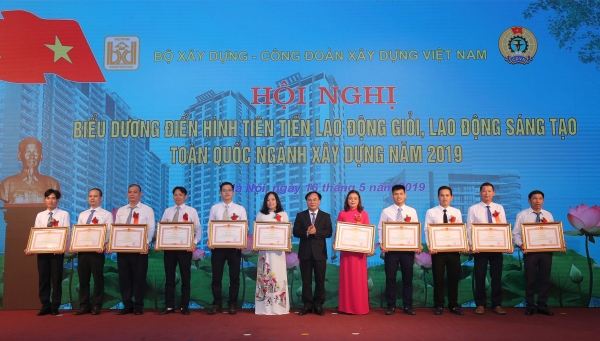 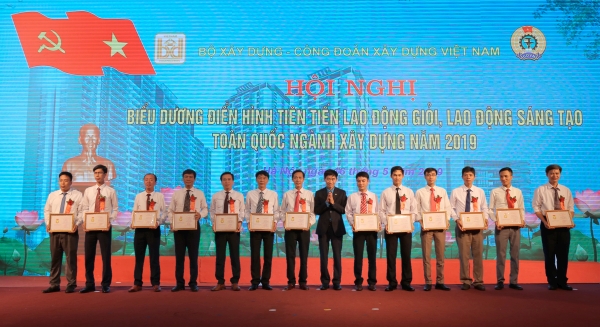 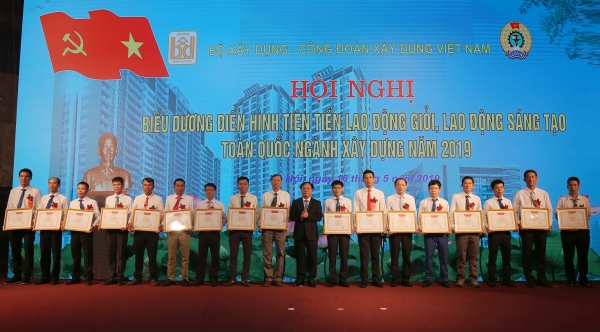 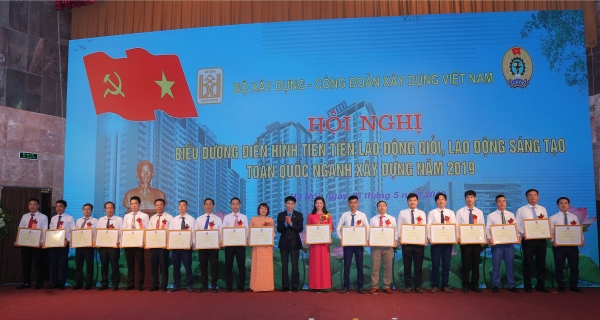 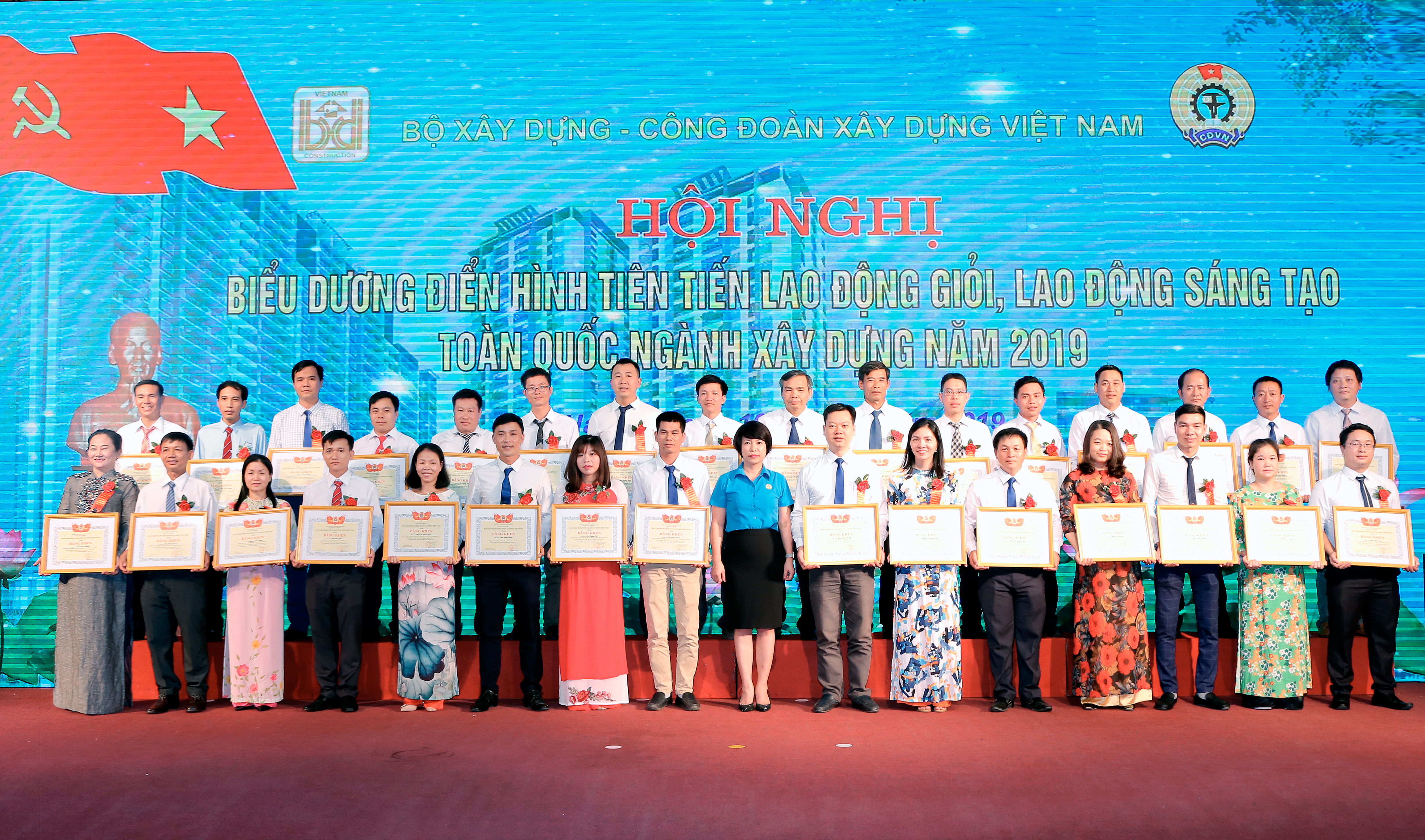 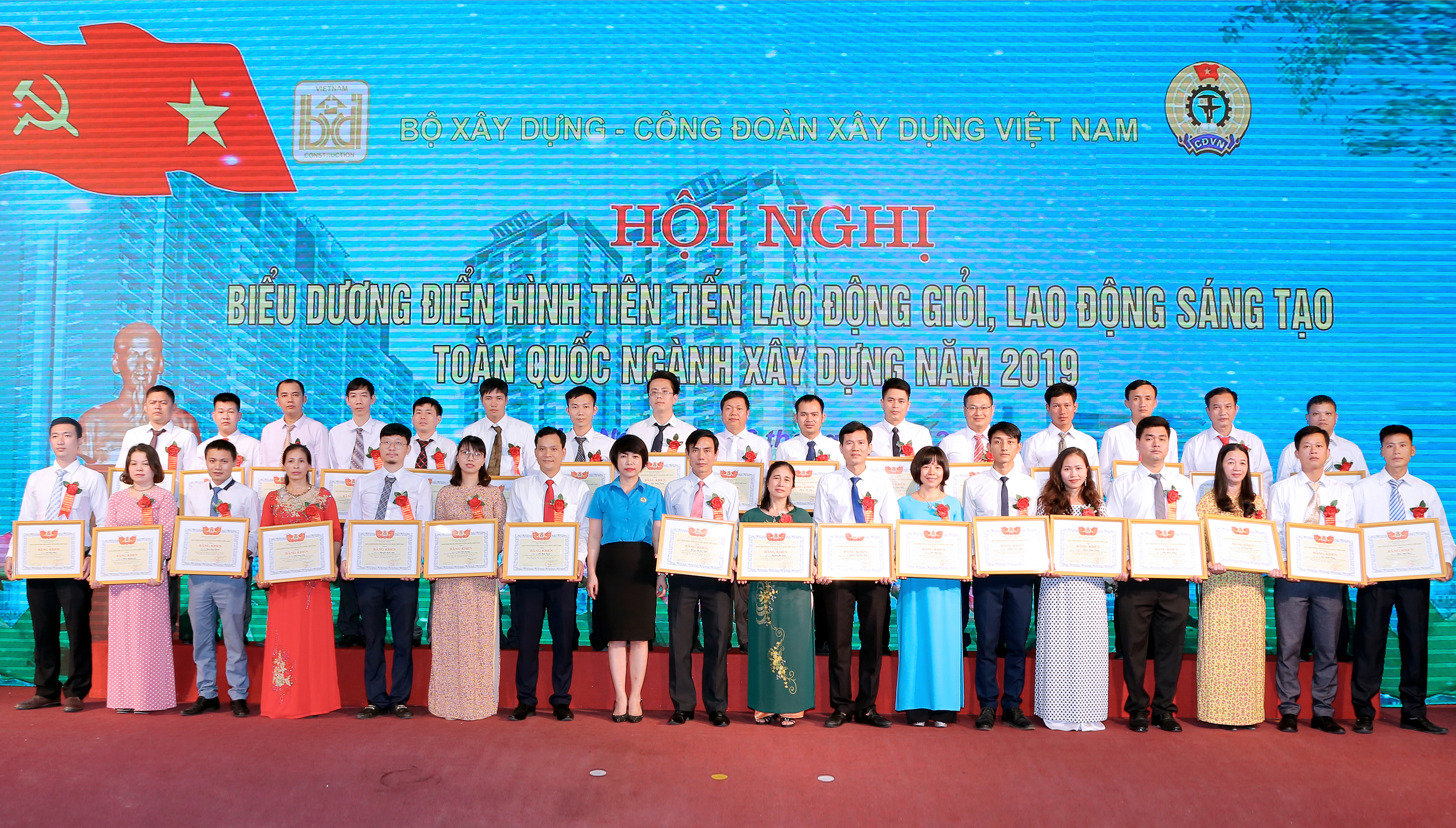 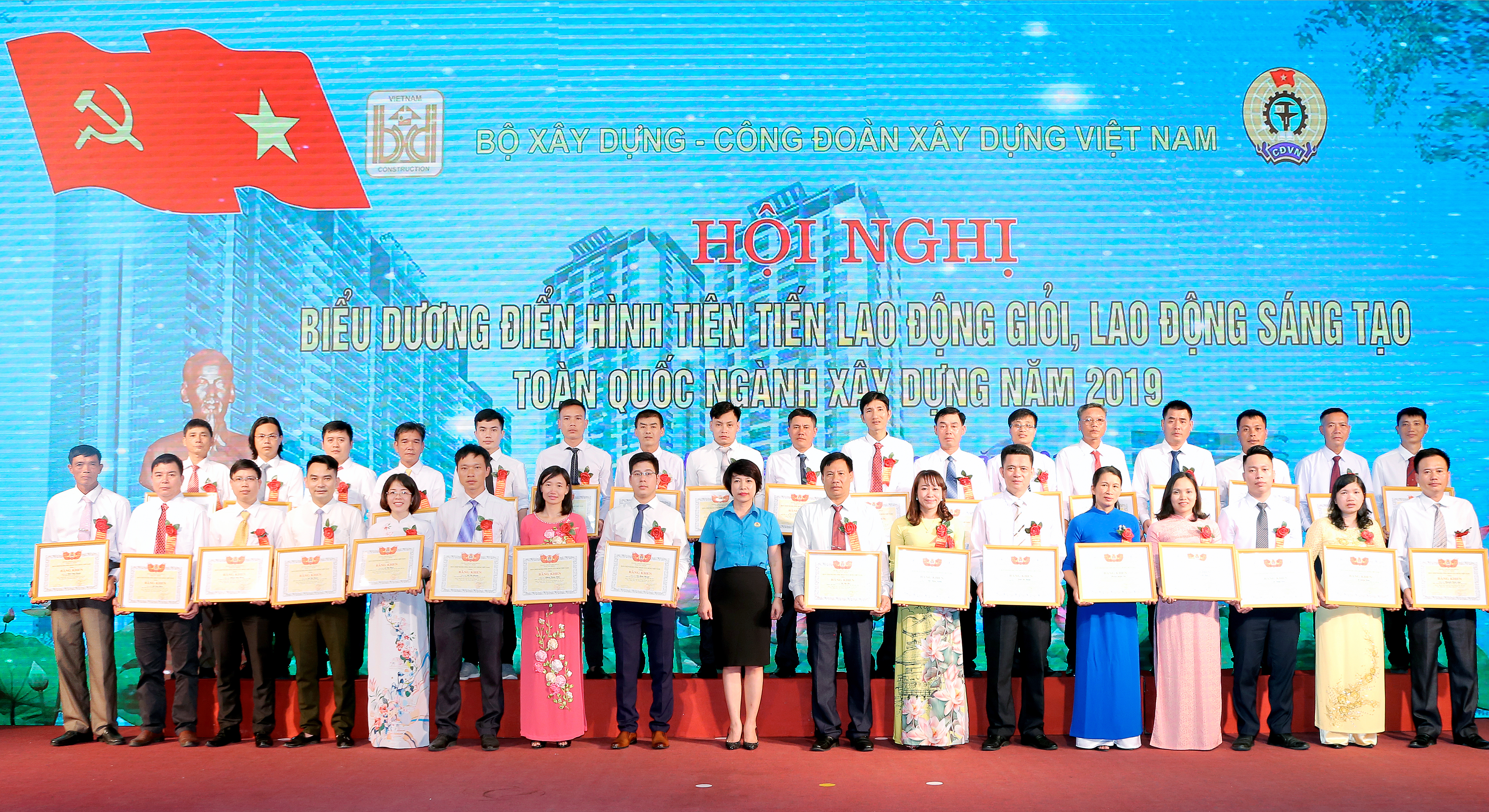 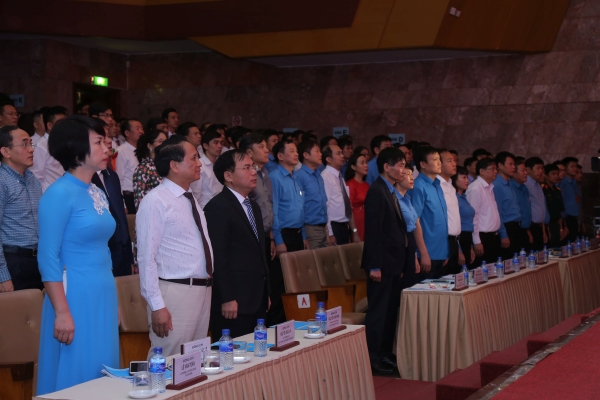 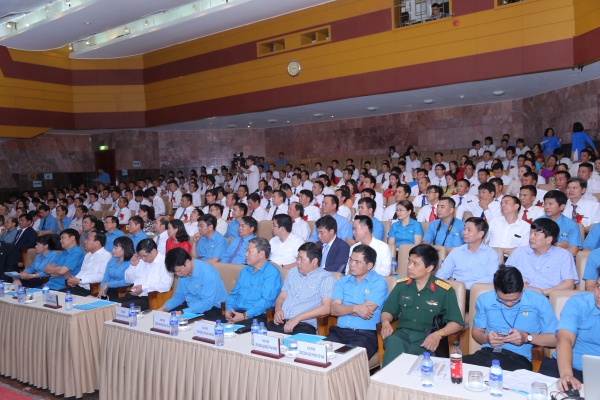 The overview of the Conference 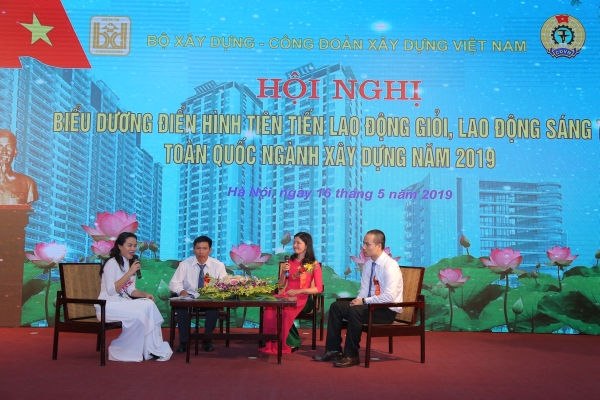 Exchanges with the typical advanced individuals 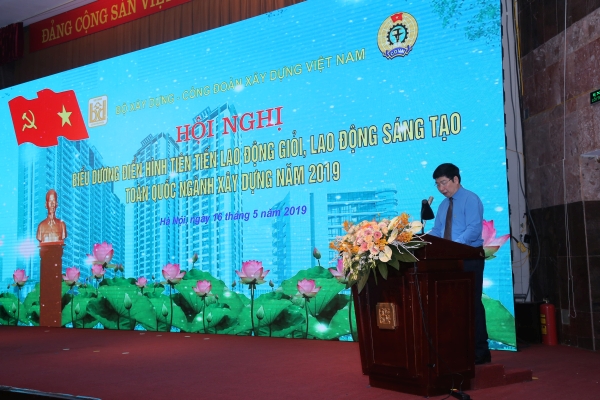 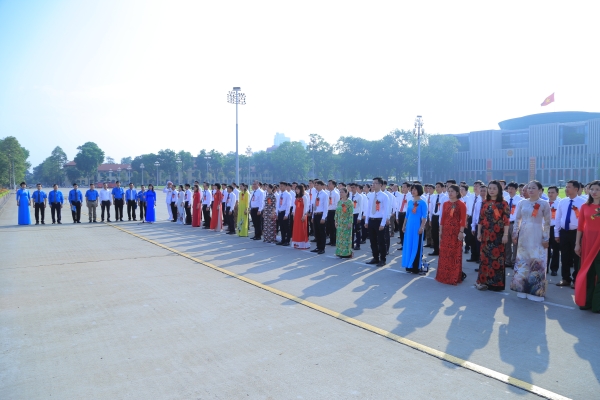 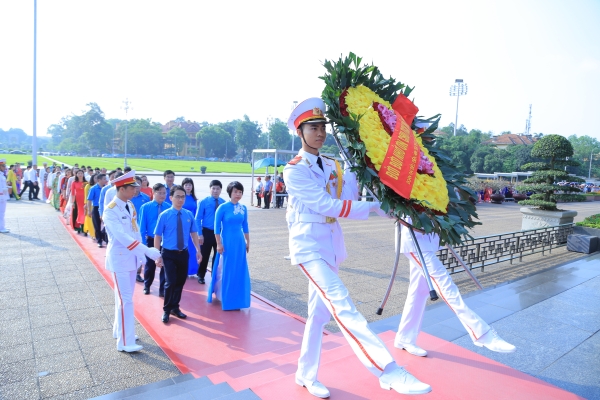 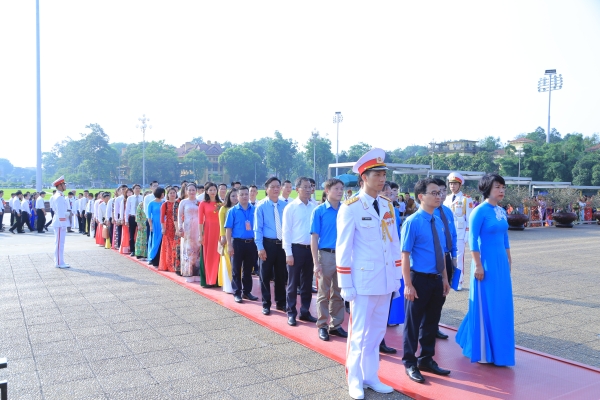